The goal of Andis is bringing together a great team to make great wine. Amador County offers the canvas for great wines, and she also gave us the gift of a dynamic team.

One great night in Amador was enough for Andy to move his Aloha shirts to the Sierra Foothills, where he could enjoy the unique wines and flavors of Amador County. After fifty years in Hawaii, where he co-founded and built the largest commercial real estate company in the state, and while still actively involved with the business today, Andy started planning the next phase of his life.
He is now the main driving force behind Andis Wines, having built the winery and a great team of people to grow for decades. Andy hand-picked a group of quality people to make great wines and offer our guests the finest hospitality.
Email Andrew

Janis, like her husband Andy, was impressed with the wine and beauty of the Sierra Foothills. Encouraging Andy to move forward with the next phase of their lives, she also decided to take her own advice. Soon after retiring from a prominent Wall Street firm, where she had worked for over 40 years and held the position of Certified Financial Planner and Wealth Advisor, Janis decided to get a winemaking certification from UC Davis.
For the past two years, Janis has been working during harvest assisting winemaker Mark Fowler. With an undergraduate degree from UC Davis, Janis claims the winery business is in her blood, and now that she has a winemaking certification, the winery business is in her head as well as her heart. Janis also holds an MBA from the University of Hawaii, and is involved with much of the strategic planning at Andis Wines.
Read the UC Davis Alumni Profile.
Email Janis

A native daughter of Amador County, Jenae grew up on the family cattle ranch in Jackson where she gained a love for agriculture. After receiving her B.S. in Business Administration with an emphasis in Marketing from Cal Poly San Luis Obispo in 2005, Jenae interned at a couple of Central Coast wineries, including Edna Valley Winery working in the cellar and learning wine production. Two years later, she joined a marketing firm in Paso Robles before moving back home to Amador County in 2009.
Joining the Andis team in July 2012 and now a partner in the company, Jenae is responsible for the day-to-day operations of the winery including bookkeeping, purchasing, community relations, marketing, advertising, and the wine club. She will often "escape" to the back of the house to get out of the office chair and enjoy the production side of winemaking. During her off-time, she's most likely helping the family on the ranch or enjoying fishing in the serenity of the mountains with her husband and dog, where there's no internet or cell phone service.
Email Jenae 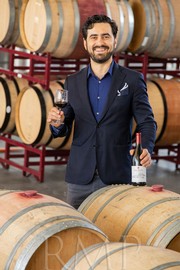 Lorenzo grew up between Albania and Italy. After graduating from the Jesuit High School, he attended the Polytechnic University of Milan, studying Civil Engineering. His travels around the wine region of Tuscany caused him to fall in love with cooking and wine, realizing that wine was not just a liquid in a bottle but a way of life. After working for famous Florentine restaurants, he decided to open his own in 2011 and soon rated it as one of the region's top ten restaurants.
In 2013 his beautiful daughter was born, and the family moved to California, where Lorenzo then enrolled in the Wine Business Management program at Sonoma State University.
"It was a bottle of the 2012 Andis Cabernet Franc that got me hooked on this land," he says. In 2015, Lorenzo joined the Andis team as a tasting room attendant and was soon promoted to National Sales Manager. Today as a Partner, he works directly with the winemaking team, putting together the best wines our vineyards can offer. Every day is a challenge, finding new outlets for Andis Wines and sharing Amador's history with folks all over the country.
"Great wines taste as they come from somewhere. Lesser wines taste as they could come from anywhere".
Email Lorenzo
Menu