Proving Barbera is More Than a Blender

Two words define Andy Friedlander’s move from a successful commercial real estate business in Hawaii to a vineyard and winery in Amador County: “Yes, dear.” After more than 50 years in real estate, Friedlander and his wife, Janis Akuna, a certified financial planner and financial advisor on Wall Street, were ready to start planning the next stages of their lives. The couple made a trip out to Amador County and within just a few days fell in love with the open spaces and communal camaraderie—not to mention the opportunity to purchase great vineyard land and build a brand. The idea for a winery, though, was Akuna’s, and Friedlander jokes that he “just obliged.” And so, Andis Wines was born.

Andis Wines completed construction of its 22,000 square-foot production and tasting facility in 2010. Today, the building, which is located on Shenandoah Road in Amador County, serves as a hub for visitors to the Sierra Foothills, hosting regional tastings and events. The wine brand has grown since its conception, increasing production up to 8,000 to 9,000 cases, depending on the vintage, to match both direct-to-consumer and wholesale success—and now the brand has moved into the next phase, what it calls a “bold new era.”

In 2016, Friedlander and Akuna contracted renowned winemaking consultant Philippe Melka and his company, Atelier Melka, to breathe new life into their brand, to produce more a modern style of wine from its estate vineyard, as well as the many vineyards they’ve purchased from. Andis Wines has always sourced from several heritage vineyards in the Amador County area, including the Original Grandpère Vineyard, owned and farmed by Terri Harvey in Upton, with its 150-year-old, gnarled Zinfandel vines. For Melka, working with Andis Wines is an organic evolution away from Cabernet Sauvignon in California—Andis was the right place, at the right time.

“The Foothills have a good microclimate, diversity of soils,” said Melka. “It’s very clean but shows depth of gravelly soils. It gives truth and is totally transparent.” Though Melka consults, it is Maayan Koschitzky who operates the day-to-day winemaking. Inspired by Melka, Koschitzky and the rest of Atelier Melka, Andis Wines also re-designed their labels with the 2017 vintage release to express the winery’s revived dedication to producing outstanding wine from the region.

The new labels feature either the winery facility on those wines made from younger vines, or a twisted Zinfandel vine for those made from old vines. Another new concept came from national sales manager, Lorenzo Muslia, to help explain to customers what Barbera is and what it should taste like. It was his idea to lean into the Italian heritage inherent to the region and create the “Barbera d’Amador,” a fun play on the traditional Italian Barbera d’Asti and Barbera d’Alba wines.

Viticulture in Amador began in the 1850s, when the area was flooded with eager Gold Rush hunters. Many of them were European and most Italian. These immigrants planted the first grapevines, and that Italian influence persists to this day. Zinfandel remains the most popular variety, and the Foothills is home to a few surviving vineyards that date back to the 1800s.

But Barbera also took a strong foot-hold. Typically used solely as a blender variety until the late 1980s, this thin-skinned and vigorous grape grew well in the hot, arid Amador climate and is still successful to this day. High-yielding vineyards can consistently produce 10 to 11 tons per acre, when left unchecked. Andis Wines never shied away from using it as a standalone variety. With its naturally high acid and low, smooth tannins, the red grape can produce a refreshing, food friendly wine from Amador—just like it can in Italy.

The 2017 vintage is the first that Koschitzky and Atelier Melka produced from start to finish. To make the Barbera d’Amador what it is today, Koschitzky built a new process line to deal with the softer skins, hoping to capture a fresher profile, control the tannins and tame the potentially overwhelming acid. He used a high percentage of whole berries and didn’t crush in order to achieve that profile. The 2017 vintage is still a very young wine, and Koschitzky pointed out that it has the potential to age well and hopes that, whether consumed now or put down for a few years, the end product showcases the high-quality of Sierra Foothills Barbera.

Dungeness crab season is finally here and we're ready to celebrate with our annual White Wine Release and Crab Feed. As much as we love Dungeness crab at Andis we're also excited to celebrate the opening of our new event facility located next to the tasting room. The perfect venue to enjoy vineyard views in a contemporary setting while cracking into fresh crab.

Details about the crab feed, held on Saturday, February 15th may be found on our event page - /CrabFeed

For those unable to attend the winery event we've come up with an easy recipe for you to enjoy at home. A bottle of our slightly citrusy Semillon is the perfect accompaniment to this buttery, spicy dish.

The following recipe was adapted from Bon Appetite with the slight variation of using Meyer Lemons, a California favorite. CLICK HERE to see the original recipe.

Using tongs, transfer crabs to platter. Add lemon juice and zest to same skillet; boil until sauce is reduced by about half, about 5 minutes. Spoon sauce over crabs. Sprinkle with remaining 1 tablespoon thyme and 1 tablespoon parsley and serve.

But we’re glad it did!

Behind the Cellar Door is here again! And as a rare treat, we’re doing barrel samples of our limited production Schioppettino [skioppet’ti:no] I know it’s a tongue twister, but it’s delicious.

Schioppettino is from Northeastern Italy, near the Slovenian border.  Its known for its ruby color and traditionally makes light to medium bodied wines that are fruit forward, spicy and earthy. Meant to be consumed young like Beaujolais and some Barberas, this is an excellent food pairing wine.

Historically, it has been used in wedding ceremonies as far back as 1282 AD.  The name itself translates roughly to “gunshot” or “little crack.” The varietal almost died off in the Phylloxera outbreak in the early 1900s. At that time, many vintners decided to replant in favor of other popular varietals, which brings us to current time here in Amador County where Andis is one of a handful of wineries growing and making wine from the grape in California.

We welcome Schioppettino into our wine portfolio with open arms and we hope you do, too!

Cheers! See you at Behind the Cellar Door.

Who doesn’t love a great meatball, especially when paired with a good wine?! I’m not talking about a bag of frozen processed meatballs, I’m talking about savory little morsels you can customize with items from your spice drawer or herb garden.
Cooking at a winery means the perfect wine pairing is always at the forefront when developing recipes. This recipe uses Spanish smoked paprika to
impart depth and a handful of local fresh herbs to enhance the old world style of our wines. Andis Grenache is used to deglaze the pan, a grape commonly associated with Spain and an even better wine to drink alongside this dish.
The best thing about meatballs is how forgiving and versatile they are; you can switch out the protein, spices, herbs or sauce to reflect the season and to pair with different wine varietals. Try pairing lamb meatballs with Andis Mourvèdre or try pairing Andis Rosè with a cranberry turkey meatball. Be sure to grab a loaf of your favorite crusty bread to sop up the savory sauce.
Grenache is currently featured on our tasting menu at Andis Wines. Come visit the winery and buy a bottle for $25.99 or a case and receive a 10% discount. Join our wine club and save over $7 per bottle! For more information on the benefits of joining Club Andis visit /Club/Join-Club- Andis, or better yet, come into our tasting room and visit with one of our knowledgeable and friendly team members where you can try the meatballs and Grenache together firsthand!

INSTRUCTIONS:
1. Place all the ingredients for the meatballs in a large bowl and mix together until
well combined. Roll into evenly sized 1oz balls and rest in the fridge to firm up
for about half an hour. (Meatballs may be frozen at this point and used at a later
date)
2. Heat the olive oil in a large based pan. Brown the meatballs on all sides, shaking
skillet so meatballs roll to brown on all sides. Remove and set aside. In the same
pan, sauté the onions until soft and translucent. Add the garlic and cook for a
further 2 minutes. Add the spices and stir through. Deglaze with the wine.
Reduce down by half. Now add the tomatoes, sugar, bay leaves and oregano,
thyme and rosemary. Season with salt and freshly ground black pepper. Return
the meatballs back into the pan and simmer on low heat for about 20 - 25
minutes until the meatballs are cooked through and the tomato sauce has
thickened.
Meatballs and sauce may also be transferred to a Crockpot to finish simmering
on low.
3. Remove herb stems and bay leaves. Spoon meatballs into serving bowls and serve
with crusty warm bread and butter. 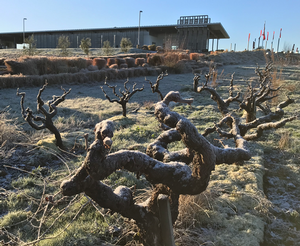 What do winemakers do with themselves outside of harvest? I can’t tell you how many times I’ve been asked this question. The truth is that we keep busy with the different cycles of vineyard and cellar work. As soon as the last 2017 barrel is put down in the cellar after harvest, we start breaking out the 2016 wines to work on our blends. Both the Atelier Melka and Andis teams are very excited about the 2016 Zinfandels and Barberas that we will be bottling in April.

When I’m not crawling through stacks of barrels or working on blends, I’m walking through our Estate vineyard. A lot of exciting changes are happening this year. If you’ve visited the winery recently you would have noticed that the vines closest to the parking lot were removed. These were some of the original Zinfandel vines planted on their own roots in 1978. Unfortunately, nature had taken its course with these vines and they were starting to succumb to the pest Phylloxera. After years of declining yield, we decided to remove the vines to pave the way for something new. The team and I are very excited to be planting Cinsault (pronounced Sin-So). This varietal is prominently featured in red and rosè wines from Southern France’s Languedoc-Roussillon region.

For the few who were able to try our small lot bottling, you may be excited to hear that we will be expanding the Schioppettino (pronounced scope-a-tino) vines in our vineyard. In the coming weeks we will be grafting our Malbec block over to Schioppettino and Cabernet Sauvignon.

The second most common question I’m asked in the tasting room this time of year is about the cold weather’s effect on the vines. In the last two weeks we’ve had freezing temperatures and even snow in Plymouth! However, this time of year the vines are dormant and totally unaffected by the cold, unlike the bundled up winemakers and vineyard managers. Luckily we finished pruning before the coldest weather hit.

In a few weeks we will start to see budbreak throughout the valley. Budbreak is when the vines wake up from their dormancy and begin to push little green shoots from their buds. This event will mark the beginning of the 2018 growing season.  To add to our excitement, 2018 will be the first year we are harvesting Sauvignon Blanc, Syrah, and Petite Sirah from our Estate vineyard. Stay tuned, more news to come!