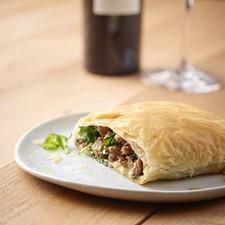 In a medium-sized mixing bowl, combine the ground hen meat with the shallot, garlic, herbs, salt and pepper.

In a medium-sized pan over medium heat, cook the seasoned hen mixture in 1 tablespoon of butter. Saute the mixture until just cooked through, about 8 minutes.

Remve from the heat and transfer to a medium-sized mixing bowl. Add the arugula and stir to wilt. Allow the mixture to cool about 30 minutes.

Brush one sheet of phyllo dough with melted butter. Fold in half and butter again. Place one sixth of the hen mixture and 1/2 ounce of Brie on the closest corners, and fold like a burrito. Butter each and fold generously. This should form a 2-inch-by-6-inch rectangle.