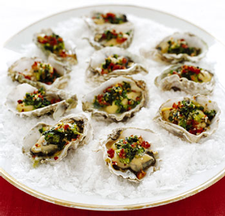 2. Melt butter in a 10-inch heavy skillet over moderate heat, then add watercress mixture and cook, stirring, until spinach is wilted, 1 to 2 minutes. Stir in Pernod, cayenne, and salt and pepper to taste, then transfer mixture to a bowl, cover and chill until cold, about 1 hour.

3. Put oven rack in middle position and preheat oven to 450˚F. While the watercress mixture chills, cook bacon in a skillet over moderate heat, turning, until crisp, then drain on paper towels and finely crumble.

4. Spread 5 cups kosher salt in a large shallow baking pan (1 inch deep) and nestle oysters (in shells) in it. Spoon watercress mixture evenly over oysters, then top with bacon and sprinkle with remaining tablespoon plus 2 teaspoons bread crumbs. Bake oysters until edges of oysters begin to curl and bread crumbs are golden, about 10 minutes.

5. Serve warm oysters in shells on a platter, nestled in kosher salt (about 5 cups).