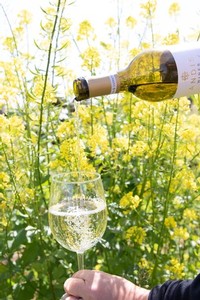 A shadowy figure Sémillon cuts; DOES IT EVEN EXIST?! It’s a mysterious grape that knows how to blend in. And it sports disguise names—perhaps it is a spy! But reporting to whom?

No, Sémillon has an identity all its own that strikes me as a secret love child of Sauvignon Blanc and Chenin Blanc. It has that lanolin lick that gives it weight reminiscent of Chenin Blanc, and is likewise prone to botrytis, but can be herby and lemony and have striking acidity that calls to mind Sauvignon Blanc. Or is it just that it gets blended with Sauvignon Blanc, so we get confused? To add to the ball of confusion, given age, Sémillon gets those fun toasty and honeyed notes.

It has its idiosyncrasies, and yet it hides.

It takes cover behind the names Bordeaux and Sauternes . It masks itself in blends, botrytis, and oak…maybe Sémillon (also sometimes spelled without the accent over the e) WANTS to remain under the radar. Well, I’m blowing its cover. Sorry, Sémi, your time has come. Now take off your baggy wool sweater and strut your stuff.

I’m so sorry, I don’t mean to objectify it; it’s just more people should seek it out. This is my opinion, but you’re welcome to borrow it.

True, some of the most famed Sémillon-based wines are Sauternes, that lusciously sweet and ethereal nectar that gets its kick from noble rot. Those are another story. One I should write soon, probably.

But today I am looking at the dry Sémillon-based wines of the world.

Sémillon is mysterious in roots as it is in personality. It is similar to Sauvignon Blanc genetically, but they don’t seem to have a parent-child relationship. Its origins may be in Bordeaux’s Left Bank, or even the Entre-Deux-Mer, but confoundingly enough, it might be named for local pronunciation of St-Émilion, despite the fact that Semillon isn’t really cultivated there. But that is just a rumor.

I confess I likely tasted some of these far earlier than they would show best—although I’ve been told that during the first few years, they can be be great, then shut down until they are maybe 7. At least this is the lore of Hunter Valley.

Speaking of, shower wine pick? I’m going with the Andis Old Vines. Old vines because I like a wine from a vine with experience if it's gonna see me naked.

Andis is a perennial favorite of mine. Out of undersung Amador they also make a Barbera that makes my heartstrings go pling. But I’ll stick with the Semillon review right now. This Semillon would be a daytime robe. It is comforting, with plush apples and honey notes and the body of silk but its medium weight silk you want to wrap yourself in. But the acidity is acute, so you can get some work done while wearing it. It’s actually a robe that can translate from work-from-home robe to home dance party when the day is over and you are ready for fun robe, as it ends with flowery notes that invite you to party.

We couldn't be more proud of our team and the delicious wines we've been creating. From the likes of Jeb Dunnuck and James Suckling to Sunset Magazine the word is out that Amador County and Andis WInes are producing wines that rival the likes of Napa and Sonoma vintners. 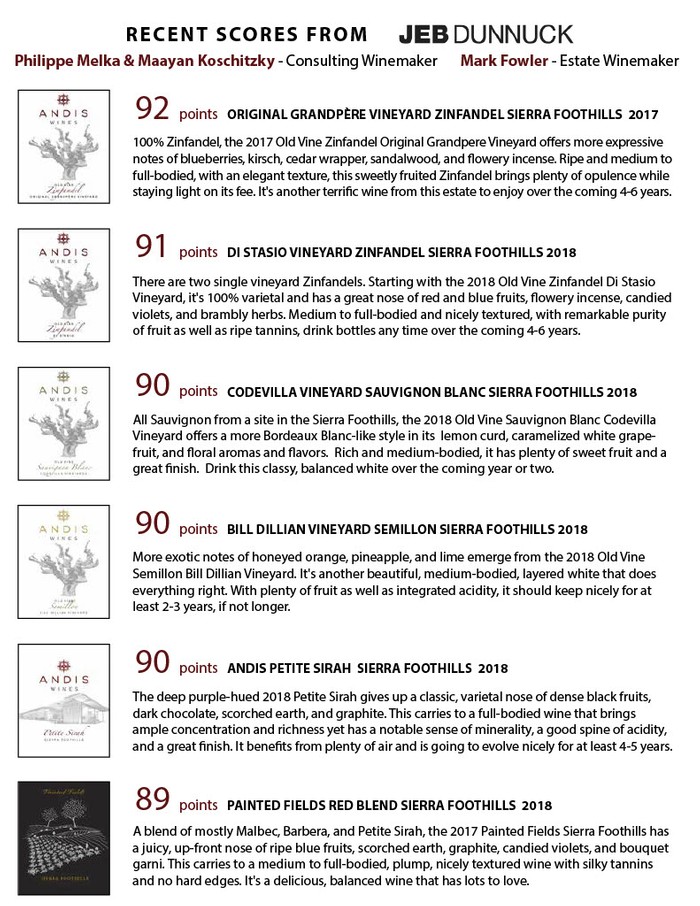 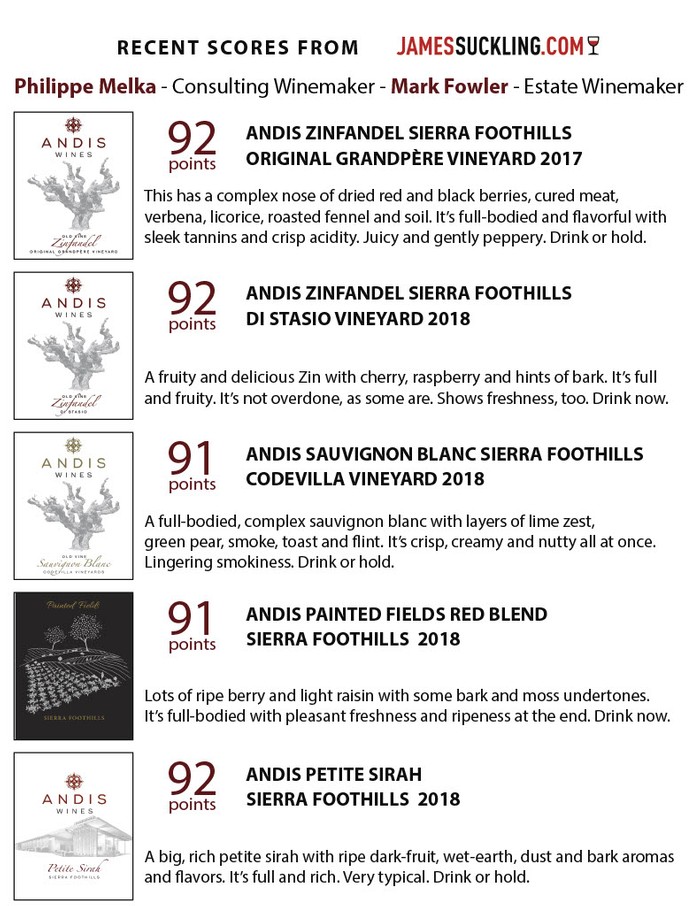 Proving Barbera is More Than a Blender

Two words define Andy Friedlander’s move from a successful commercial real estate business in Hawaii to a vineyard and winery in Amador County: “Yes, dear.” After more than 50 years in real estate, Friedlander and his wife, Janis Akuna, a certified financial planner and financial advisor on Wall Street, were ready to start planning the next stages of their lives. The couple made a trip out to Amador County and within just a few days fell in love with the open spaces and communal camaraderie—not to mention the opportunity to purchase great vineyard land and build a brand. The idea for a winery, though, was Akuna’s, and Friedlander jokes that he “just obliged.” And so, Andis Wines was born.

Andis Wines completed construction of its 22,000 square-foot production and tasting facility in 2010. Today, the building, which is located on Shenandoah Road in Amador County, serves as a hub for visitors to the Sierra Foothills, hosting regional tastings and events. The wine brand has grown since its conception, increasing production up to 8,000 to 9,000 cases, depending on the vintage, to match both direct-to-consumer and wholesale success—and now the brand has moved into the next phase, what it calls a “bold new era.”

In 2016, Friedlander and Akuna contracted renowned winemaking consultant Philippe Melka and his company, Atelier Melka, to breathe new life into their brand, to produce more a modern style of wine from its estate vineyard, as well as the many vineyards they’ve purchased from. Andis Wines has always sourced from several heritage vineyards in the Amador County area, including the Original Grandpère Vineyard, owned and farmed by Terri Harvey in Upton, with its 150-year-old, gnarled Zinfandel vines. For Melka, working with Andis Wines is an organic evolution away from Cabernet Sauvignon in California—Andis was the right place, at the right time.

“The Foothills have a good microclimate, diversity of soils,” said Melka. “It’s very clean but shows depth of gravelly soils. It gives truth and is totally transparent.” Though Melka consults, it is Maayan Koschitzky who operates the day-to-day winemaking. Inspired by Melka, Koschitzky and the rest of Atelier Melka, Andis Wines also re-designed their labels with the 2017 vintage release to express the winery’s revived dedication to producing outstanding wine from the region.

The new labels feature either the winery facility on those wines made from younger vines, or a twisted Zinfandel vine for those made from old vines. Another new concept came from national sales manager, Lorenzo Muslia, to help explain to customers what Barbera is and what it should taste like. It was his idea to lean into the Italian heritage inherent to the region and create the “Barbera d’Amador,” a fun play on the traditional Italian Barbera d’Asti and Barbera d’Alba wines.

Viticulture in Amador began in the 1850s, when the area was flooded with eager Gold Rush hunters. Many of them were European and most Italian. These immigrants planted the first grapevines, and that Italian influence persists to this day. Zinfandel remains the most popular variety, and the Foothills is home to a few surviving vineyards that date back to the 1800s.

But Barbera also took a strong foot-hold. Typically used solely as a blender variety until the late 1980s, this thin-skinned and vigorous grape grew well in the hot, arid Amador climate and is still successful to this day. High-yielding vineyards can consistently produce 10 to 11 tons per acre, when left unchecked. Andis Wines never shied away from using it as a standalone variety. With its naturally high acid and low, smooth tannins, the red grape can produce a refreshing, food friendly wine from Amador—just like it can in Italy.

The 2017 vintage is the first that Koschitzky and Atelier Melka produced from start to finish. To make the Barbera d’Amador what it is today, Koschitzky built a new process line to deal with the softer skins, hoping to capture a fresher profile, control the tannins and tame the potentially overwhelming acid. He used a high percentage of whole berries and didn’t crush in order to achieve that profile. The 2017 vintage is still a very young wine, and Koschitzky pointed out that it has the potential to age well and hopes that, whether consumed now or put down for a few years, the end product showcases the high-quality of Sierra Foothills Barbera.

Keep up to date on the latest wine releases, events, and promotions and get 10% off your next order.